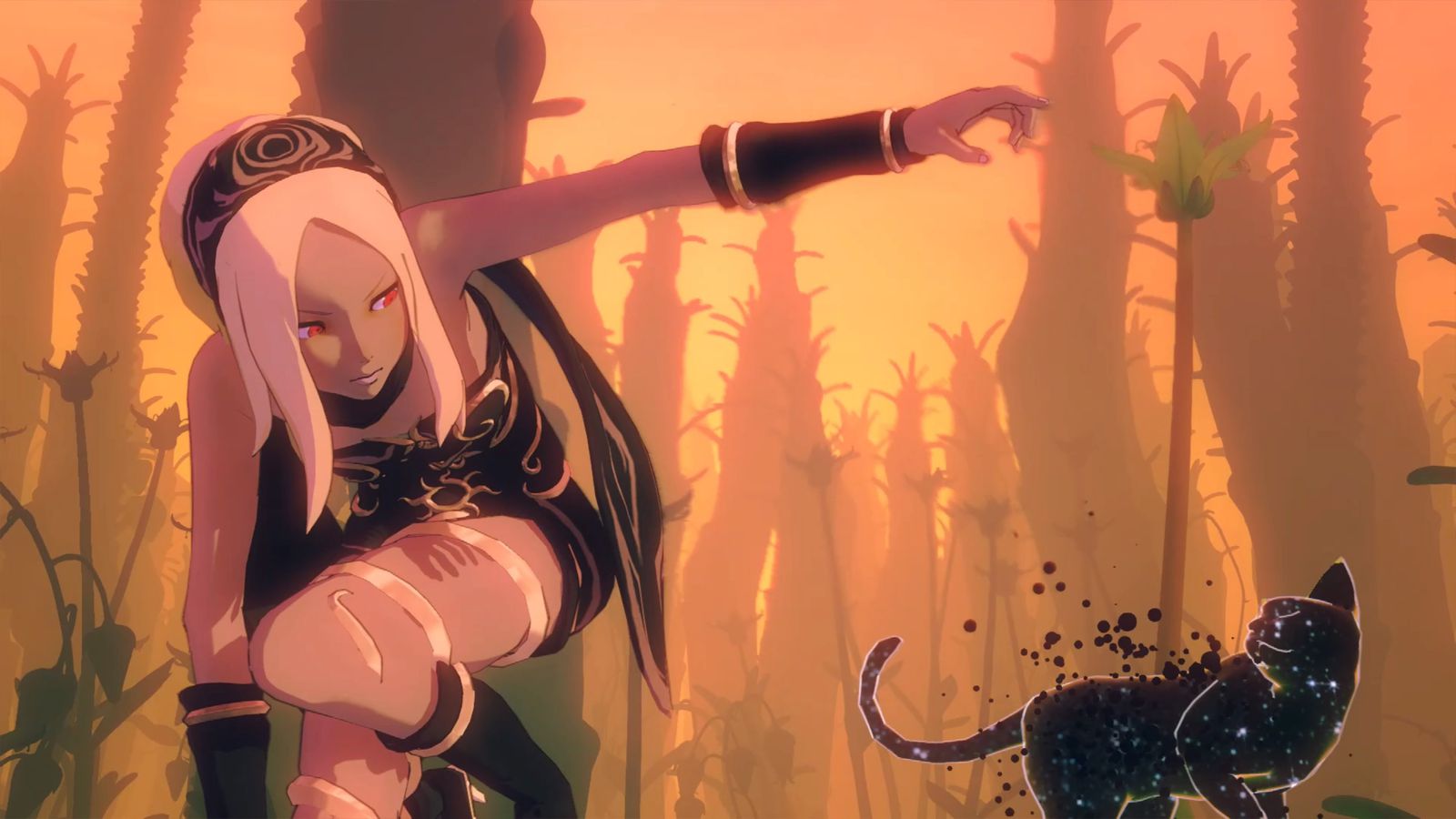 Kat, the superheroine of Gravity Rush 2, has plenty of opportunities to save the day (and the world), but she most often spends her time and her powers on the mundane. A typical afternoon is spent delivering newspapers, catching runaway balloons, running errands for the elderly, and, with whatever she has left of her day, dismantling a financial system that favors the few over the many. You know, like any socially conscious young person.

Gravity Rush 2 is, and this isn’t me reaching, 2017’s first (and potentially only) big-budget video game about the income gap, the ethical and personal complexities of salvaging modern capitalist societies, and one jumper-loving young woman. With the help of a cat made of stardust, Kat and her cat pursue, often by force, a historic economic rebalancing. 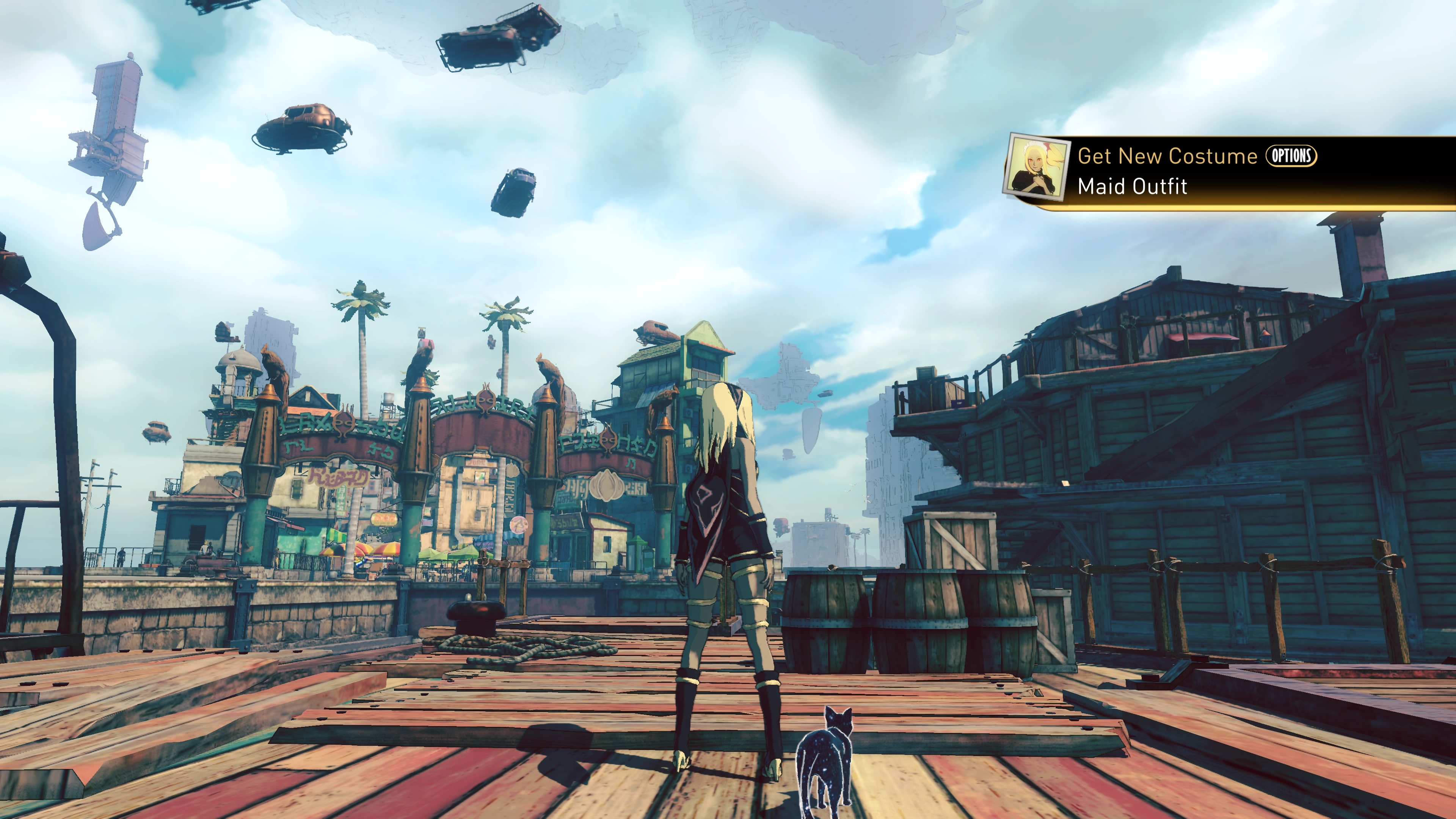 The game is set in the sky on a collection of villages and cities built onto man-made islands that float on air. Social status is layered like a sour trifle. The most affluent citizens live in spacious estates in clear skies. Miles beneath, in the clouds, wades a collection of marketplaces ensconced by sun-cooked apartment buildings. On the lowest archipelago, tenements and industrialization are stacked atop each other, held together by a purple, mucousy fog.

Kat’s power allows her steer the direction of gravity; in a video game about the pyramid of income inequality, you play as the person who can invert what goes up and what comes down. I’d say the game lacks subtlety, but compared to the political blockbusters of Peter Berg, it’s Bulgakov.

Even without the political messaging, Gravity Rush 2 is an unlikely creative gamble from Sony. Its predecessor, initially released in 2011 on Sony’s neglected portable, the PlayStation Vita, was promising, but under promoted and overlooked, neither a critical darling nor a sales phenom. Over the years, Sony did the minimum to retain its small, but passionate fan base. In 2012, Kat appeared in PlayStation All-Stars Battle Royale, an aborted attempt to cordon Sony’s roster of exclusive characters in a middling fighting game. In January 2016, Sony published a remastered version of Gravity Rush for the PS4, a console that’s reach is tens of millions larger than the Vita. 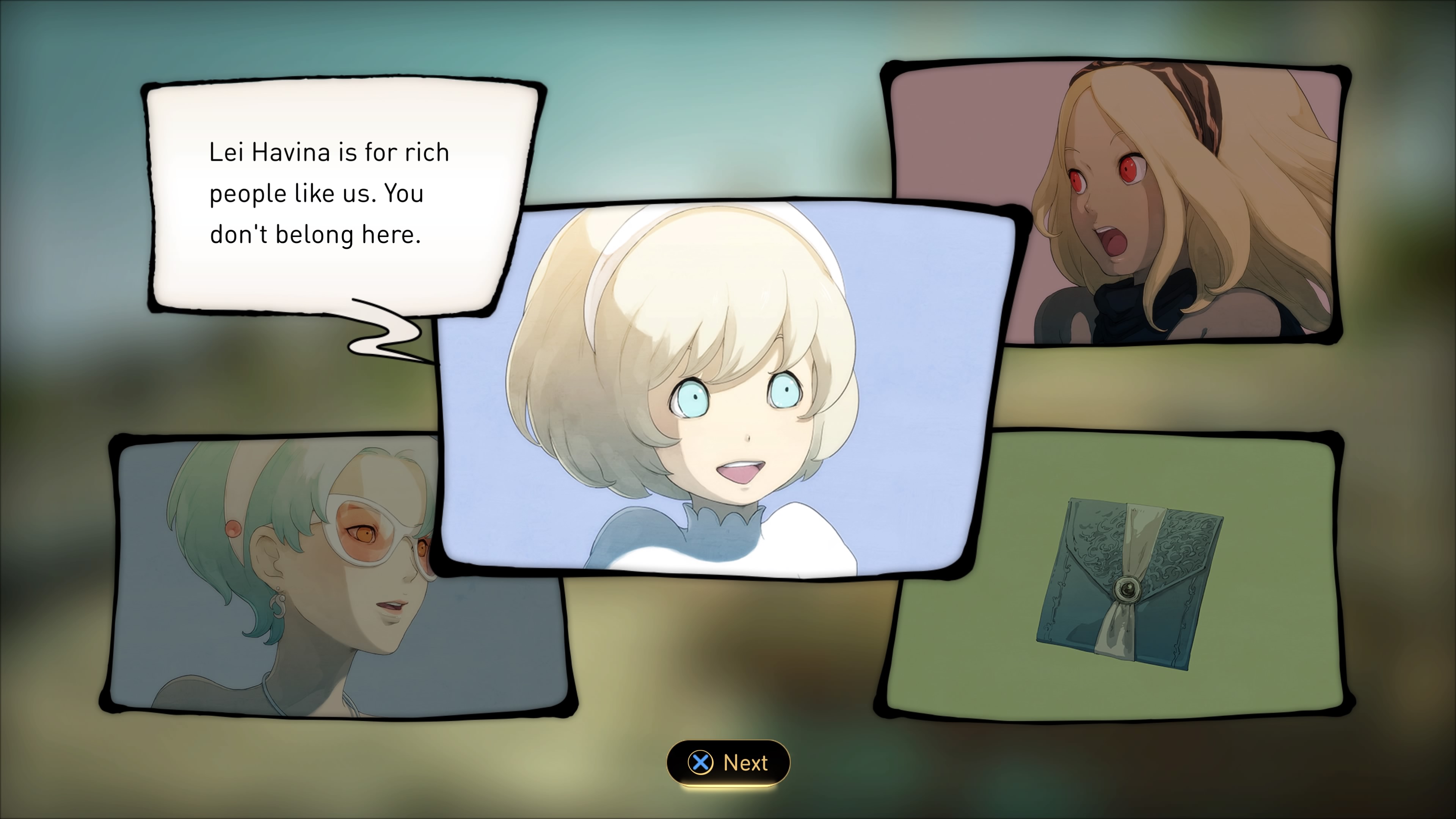 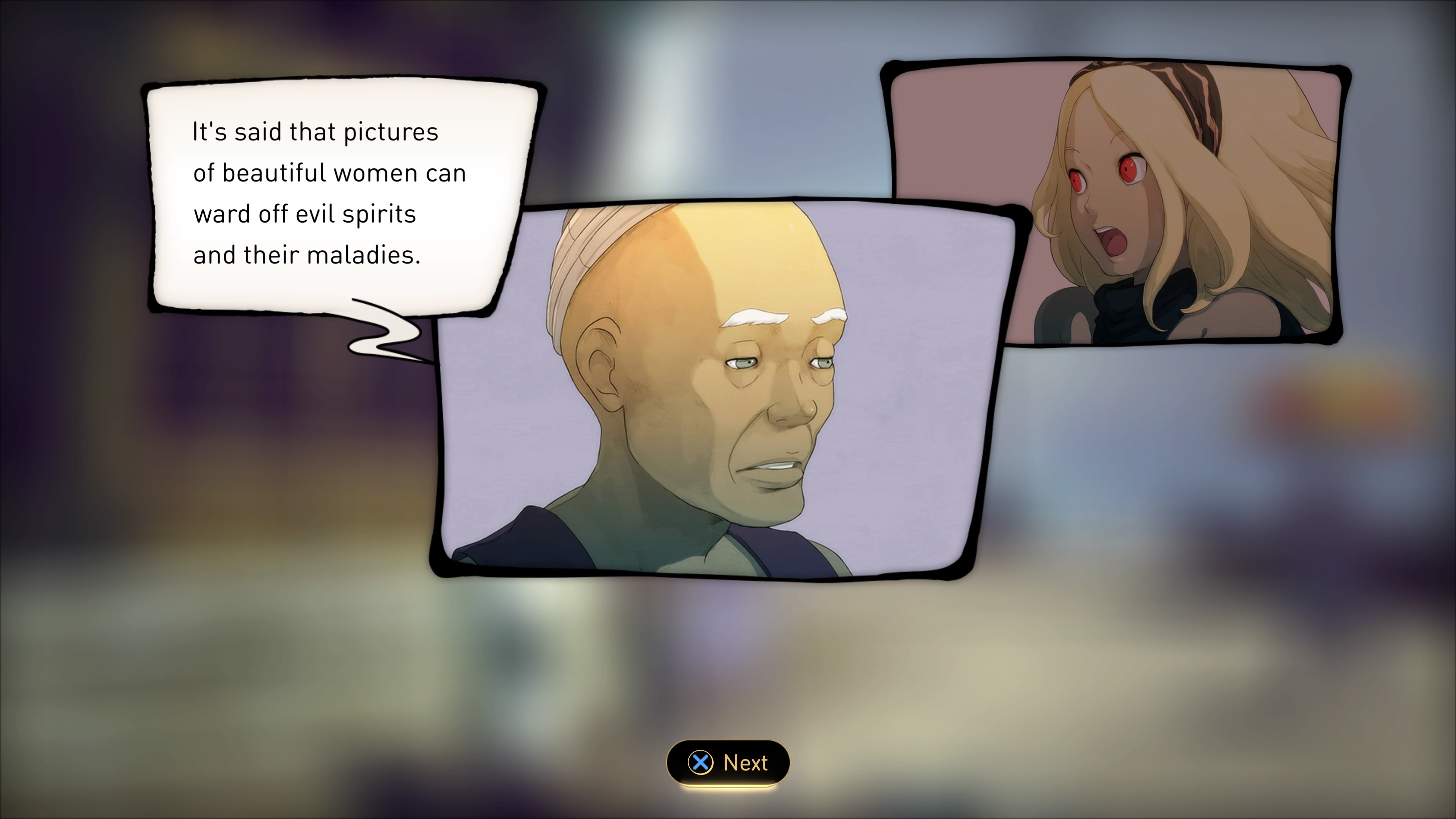 While Gravity Rush 2 has some of the most relatable and well-drawn female protagonists in a blockbuster video game, it occasionally regresses to fan service. One early mission has Kat snapping candid photos of “pretty women” on the street at the request of an elderly man. You see, he claims he needs these photos or he’ll die.

The female characters, while sharply written, wear wardrobes imagined by men. Kat’s clothes include a sexy cat costume and a maid outfit — both originally appeared as DLC for the original Gravity Rush. Kat’s partner Raven wears a bodysuit that covers enough to avoid a Mature rating. And many of the local women walk to work in bikini tops. There’s nothing wrong with strong women wearing sexy clothing. Rather it feels at odds with a game that otherwise has no interest in sexuality or even romantic relationships.

Hopefully anyone interested in Gravity Rush 2 made time to play the remaster. (I’d encourage you to just read the Wiki, but the Plot section has needed expansion since 2013, as good a sign of cultural apathy as any.) The story begins where its six-year-old predecessor concluded, and the characters seem just as perplexed as incoming players.

The developers, SIE Japan Studio and Project Siren, created an introduction that’s doubly off-putting: narratively impenetrable to newcomers and aesthetically backwards to fans. A game that promises a superhero soaring through crowded cities begins with an exhausting and patronizing tutorial set atop a claustrophobic mining vessel. Long stretches of dialogue patch together labor on an abstract alien environment, where Kat mines for ore, busting stone after stone after stone after stone. The game gives you an idea, intentionally or not, of the existential grind of its fictional working class.

The intro, however banal, is consistent with the overall tone. Gravity Rush 2 is a superhero story with a sense of humility, down to Kat’s gift. Manipulated gravity is unpredictable, so Kat doesn’t fly so much as a semi-controlled “fall.” Like Alice in the rabbit hole, she tumbles downward, upward, and sideways. Her telekinesis lifts boxes and hurls them at enemies, though only half the time do they make contact. Just as often, a flying box ricochets off a lamp post, splinters into the ground, or zips into the horizon.

But the game rewards commitment, practice, and patience, each hour richer and more thoughtfully designed than the one before it. Once the mining ship takes port at the city, a couple hours into an unexpectedly long and episodic story, Kat is introduced to a map full of missions, a menu of unlockable powers, and a list of side-activities. Just zipping from mission to mission is a pleasure. Flight is loose and relaxed, as if the entire world is underwater and Kat has just dove in. 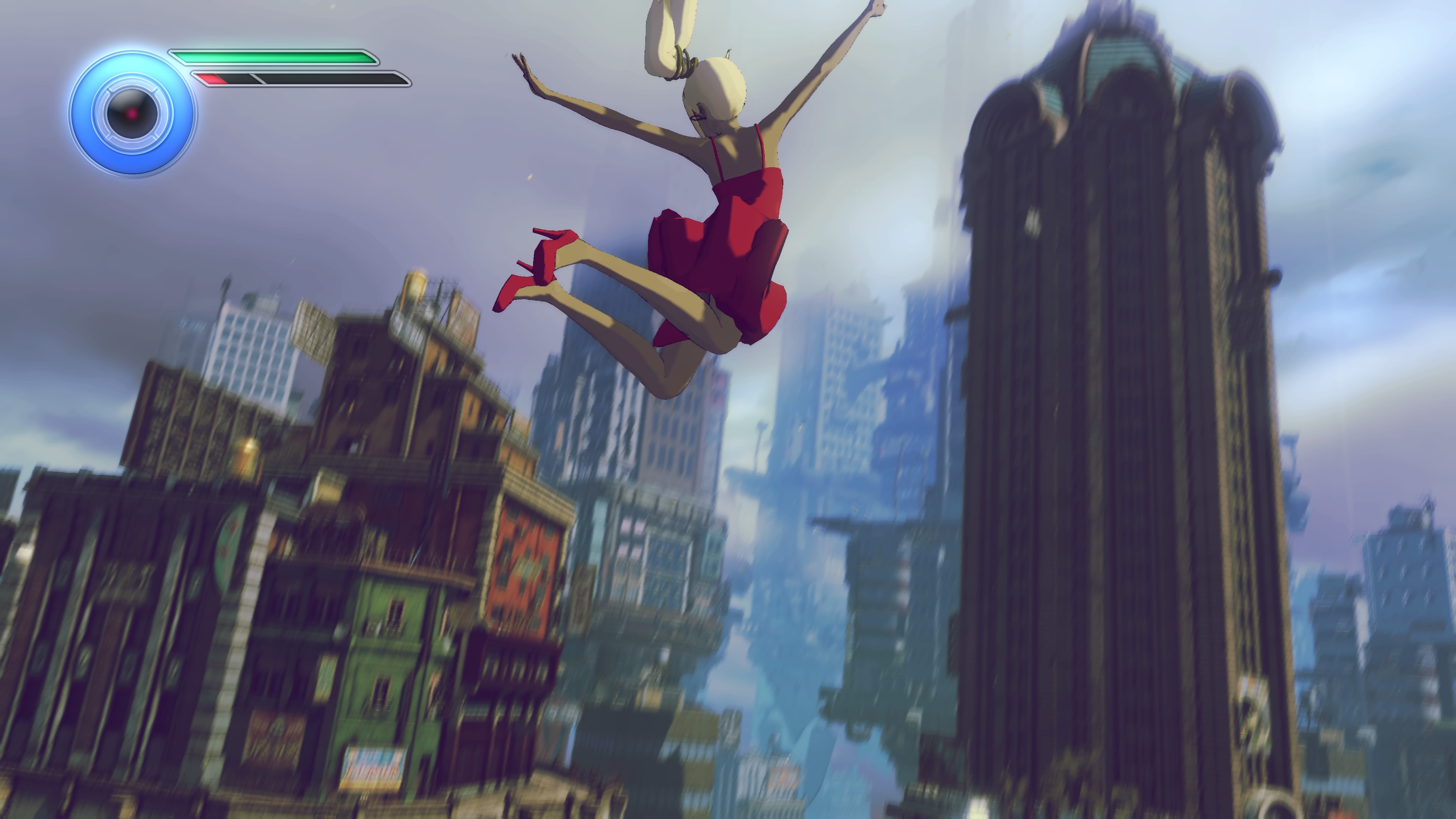 Gravity Rush is enamored with architecture, particularly with how Kat’s gift allows the player to look at and experience buildings and publics space in new, intimate fashions. Because entire skyscrapers often float on tiny islands of their own, the buildings can be viewed like 3D models. Like Kiki’s Delivery Service (another tale of a young girl with the gift of flight who prefers the mundane over heroics) the aesthetic borrows liberally from Sweden and other port cities across Europe, but speckled through the different towns are a variety of inspirations, from the alleys of the Greater Antilles to the shopping centers of Shinjuku.

Walls, rooftops, and the underbellies of the constructions are speckled with a pink gem currency that upgrades Kat’s powers and provides the minimum excuse to investigate every nook and cranny of every building. This would be tedious if not for the game’s ecstatic sense of momentum. Besides falling, Kat has the ability to slide across surfaces in any direction, which feels sort of like grinding in Tony Hawk Pro Skater or Jet Set Radio, Slipping up a 50-story clock tower, then free falling over the other side never loses its thrill.

The game revels in this disorienting effect, sometimes to a fault. Up close, the lack of precision is irritating, and the camera can get caught behind buildings or inside of giant enemies. I remember zipping from enemies with kicks in the original, but found it tedious here, focusing my upgrades on telekinetic powers that turned shipping pallets and tables and humans into lethal projectiles.

I would miss the acrobatics if it weren’t so fun to hurl boxes into a row of humans, like Darth Vader bowling with force powers. 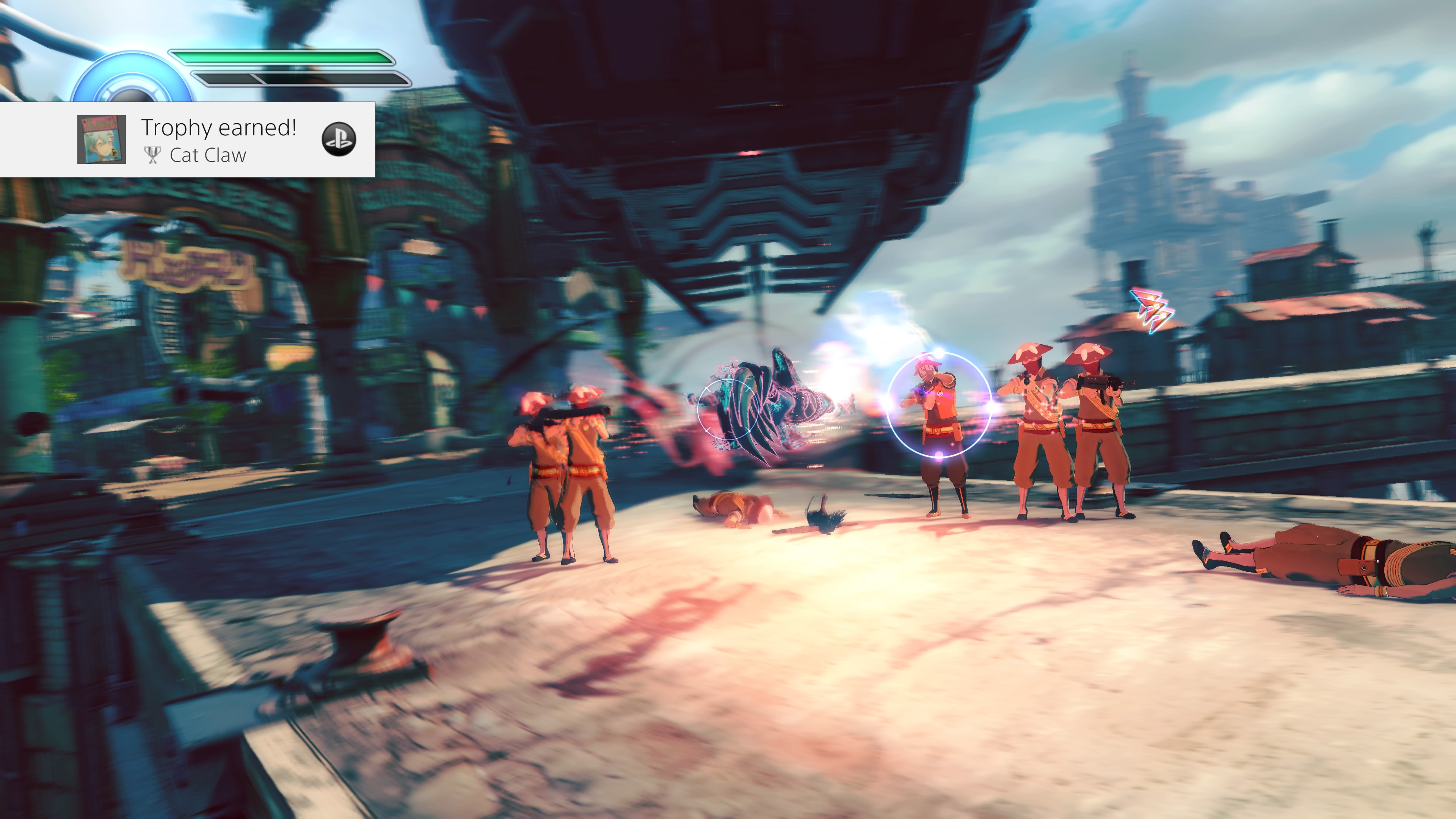 In time, Kat gains additional powers, including two alternate styles of controlling gravity. One makes her moves floatier, and balletic. Another gives her added weight, turning her into a human comet. Watching this character goofily master gravity while she wobbles through political revolution is so unlike anything in games, regularly subverting masculine power fantasies of the man good at everything, destined to save the day. In fact, all of the game’s strongest and most active heroes and villains are women, not just lithe acrobats that have become a cliche of action films, but muscular and proven fighters that men turn to when the going get’s tough. Late in the game, Kat’s friend Raven arrives as the would-be prince in shining armor. “The man told me you need saving,” she says with a smirk.

And so we have a game about a band of women overthrowing a collection of old men who maintain a corrupt and deadly status quo. Maybe it’s capitalism. Or maybe it’s communism. The architecture and flying cars take clear inspiration from Cuban design, and one layer of islands is named Havina. The writers seem less interested in critiquing specific political systems than highlighting how threats to crooked financial structures are like flies in a spiderweb; it’s hard to untangle from the inside working out. Missions are bookended with conversations about meeting the obligations of a system that feeds you, your family, and your employee dependents; protecting one’s own survival; and making sacrifices for the basic equity of universal human rights. What could have been a Robin Hood is a morally curious exploration of responsibility. 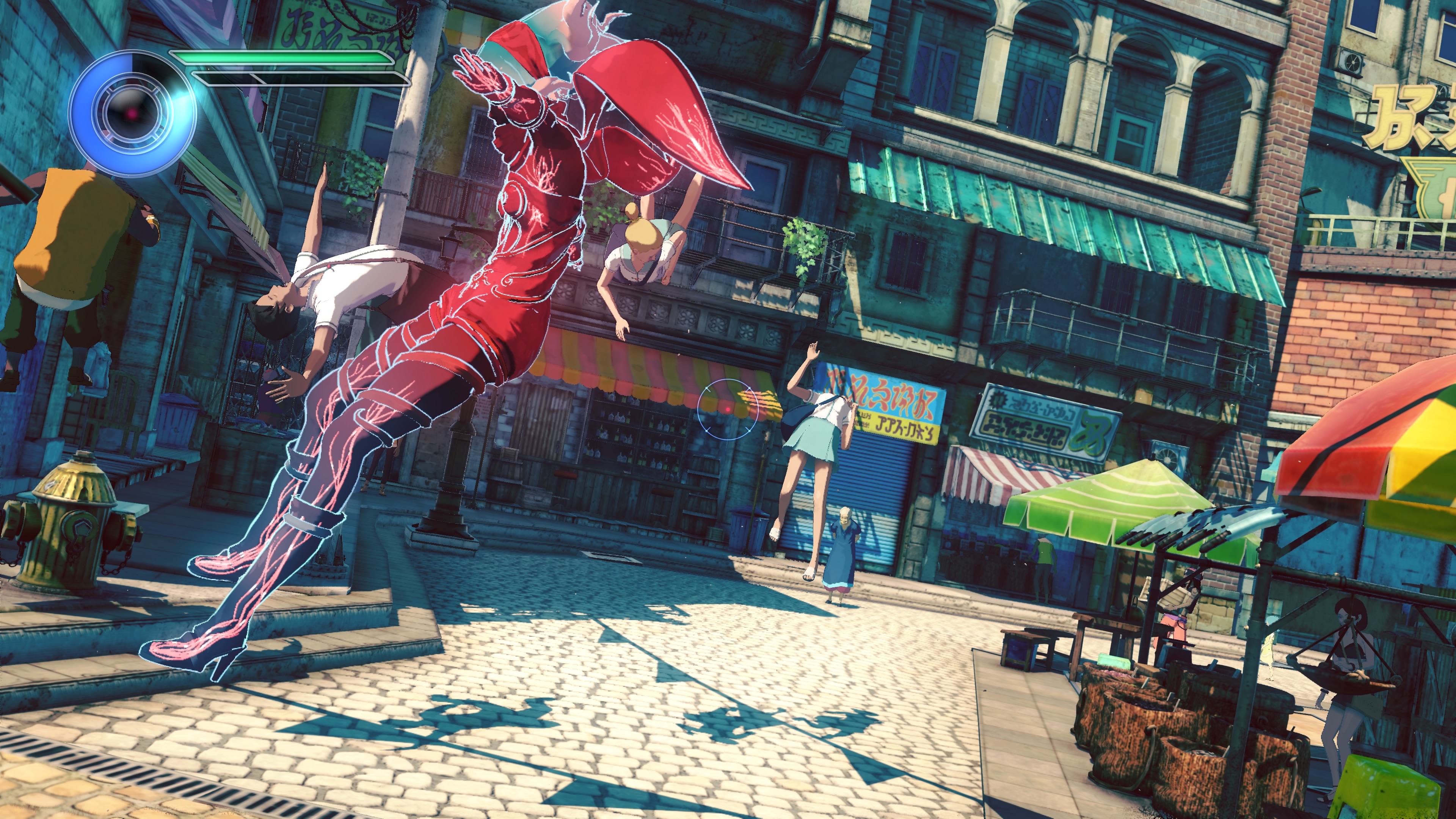 The story struggles when it goes full Christopher Nolan. What begins as a ponderous chin-scratch later falls into its own naval. Like a college student on their first hit of salvia, the questions drift from “What are our universal rights?” to “What are we and are we even us? Is this a dream? Are dreams even dreams?” While the first half the game is unguided in design, the second half is unmoored in philosophy. An unexpected and large third act drops everything for a Mr. Freeze-esque dilemma involving love and time, some referential body horror, and a smattering of quandaries about the cost of privacy for security. The game would end just as well before this sequence, and so it feels like a bonus free expansion, not quite as cohesive as the rest of the game, but no less fun or generous in terms of things to do.

Gravity Rush 2 is an ambitious game, an open-world title without vehicles to drive or guns to shoot. It feels like something many critics and fans have asked for, a new kind of blockbuster that deemphasizes violence and weapons, making room and time for some bigger and more audacious ideas. Like Kat’s control of gravity, it sometimes loses control, and soars off into an unexpected and unclear direction. But like the free fall, the adventure is most enjoyable when you relax and simply see where it takes you. The Old Man and The Pen