The programmer will create original series for the messaging application, starting with Watch Party: The Bachelor, which will debut Tuesday, Jan. 3, following the season premiere of reality-competition series The Bachelor on ABC the night before.

The weekly series will debut Tuesday mornings, with 10 original episodes and one Live Story, and it will feature celebrities, comedians, superfans and past contestants discussing the previous night’s installment of The Bachelor.

Other shows based on Disney-ABC Television Group will be added, and the programmer will sell all ad inventory for its content on Snapchat.

Disney-ABC has rewritten the rules for how to develop daring, fun and adventurous series for TV, mastering formats ranging from scripted to reality and drama to comedy. It will be a vital partner as we continue to expand our lineup of shows on Discover, and we’re excited to kick off 2017 by bringing one of their most beloved brands to Snapchat.

We look forward to working together with Snapchat to not only reach Bachelor fans in an entirely new way, but to also provide our advertising partners with even more opportunities.

Bachelor fans: Will you check out Watch Party: The Bachelor on Snapchat? 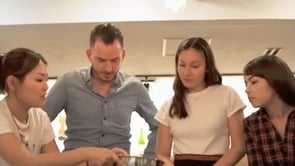 Snap expects some IPO investors to hold stock for a year